What is Holi Festival?

Holi is a Hindu festival celebrated all over India and Nepal every year, usually during the month of March. It is a spring festival signifying the victory of good over evil and the celebration of a good harvest. Holi festival is now, however, more commonly known as the festival of colour! It spans over a night and a day with a big bonfire on the full moon and the wild and chaotic colour celebrations the day after!

We had heard a lot about Holi festival with imitation festivals recently even springing up all over Europe and even in our native London. And, so going to a traditional Holi festival celebration was top of our India bucket list! We would soon find out that these European day events with sprinklings of colour have absolutely nothing on the real Holi colour bomb!

We were super excited when we realised that our trip to India overlapped with Holi festival and began researching the best cities to celebrate it in!

The top destinations to celebrate a traditional Holi festival seemed be; Delhi, Udaipur, Jaipur, Pushkar and with Goa also being in the run but more on the touristy side! Luckily when we arranged our volunteer work with Zostel hostel we were placed in Udaipur and so the decision was made!

Turns out this was a pretty awesome place to celebrate and not as overwhelming as in Delhi or Mathura and not as naked like Pushkar…yes, naked. We later heard that in Pushkar all the men have their shirts forcibly ripped off and  thrown into a huge pile! Weird! Anyway, as we were in charge of all hostel activities we got everyone together and had one epic Holi weekend!

We had heard through the grapevine that each year to celebrate the first night of Holi there was a big bonfire lit in Jagdish Chowk, the main square in the centre of Udaipur. In the days leading up to Holi we saw preparation begin; a stage being erected and lots of little paint stalls popping up all over the place with some very luminous looking paints! Oh dear! The excitement was building as was our anticipation!!

On the day, known as Holika Dahan, as we wandered through the lanes of Udaipur we saw bonfires being prepared on nearly every corner and the biggest one being hauled up in the centre of the square almost looking like a huge Christmas tree! Looks like Holi festival in Udaipur wasn’t just a matter of throwing a bit of paint here and there then but was actually going to be a full scale event!

We gathered everyone in the hostel together at around 6pm and headed down to the square! We had hoped to get a seat looking down on the action from the steps of Jagdish Temple but turns out every other person and their friend had also had this idea as the steps were heaving full! So, we found a spot which we thought would be tucked away at the side of the square but which actually turned out to be slap bang in the middle of the action and actually a hell of a lot more fun!

Up on the stage were some “DJ’s” and no sooner had we found our spot, the lively show host bounced onto the stage! The next few hours were filled with music, a lot of building up the crowd with cheers and some very questionable but hilarious dance acts…including who can only  be described as India’s answer to Michael Jackson! The DJ’s blasted the music loudly which got everyone in the mood to party – despite his happy hands skipping every track JUST before it hit its baseline…doh! We danced our hearts out with everyone around us from teenage boys (and their many selfies) to whole Indian families! Everyone was in great spirits and seemed to be waiting with baited breath for the bonfire to go up!

They didn’t have to wait long as the smaller bonfires around the square were sporadically lit, blowing up quickly and throwing their sparks in every direction despite all the electric wires running just over head…no health and safety here! The music boomed and confetti canons spilled down on us from above as we danced under the lights and lanterns – it was a blur of warmth, lights and happiness on everyone’s faces!

Then the moment we had all been waiting for…the bonfire! The police made a few efforts to move the heaving crowd backwards to a “safe” distance from the fire! However, with the number of people and the size of the square no one really moved far – keen to keep their eyes on the towering pile of wood and hundreds of packets of fireworks attached! Oh yeah – did we forget to mention? As if a huge burning wood pile wasn’t enough, it was laced all over and around the base with packet upon packet of fireworks – this was going to be interesting!

No sooner was the bonfire lit and the heat quickly rising did the surge of people begin. The the fireworks danced,  jumping, firing and crackling into the crowd. It was chaotic and intense and people pushed backwards trying not to get hit. Josh scrambled over a moped and I hid underneath a small shelter, using my jumper to cover the head of a small child whose eyes were wide! But, as the fireworks died out and the fire left to burn it was in some strange way an enjoyable kind of carnage. Everyone was buzzing with electric adrenaline as we were ushered out of the square and along the road back to the safety of the hostel. Time for a cold beer and to prepare ourselves mentally for the main event the next day…just what was in store for us?

The day had come, Holi Festival was finally here! We woke up  early and distributed packets of green, blue, yellow, purple and pink paints all over the hostel. We donned some old clothes and got ready to celebrate. No sooner had we eaten breakfast, Josh was running around like a big kid throwing paint and of course tipping a bag right over  my head. Looks like Holi was on!

We rounded the troops, got them suitably smeared in the luminous colours and bravely stepped foot out onto the streets. Zostel Udaipur is situated in the middle of some small winding lanes and no sooner had we set off, there were small children charging at us from every direction and even from the windows above. Despite running fearlessly towards us with handfuls of paint they were super gentle and sweet with the paints smearing it on either side of our faces and wishing us a very cute ‘Happy Holi’. Okay, so there were a few terrors, especially those hooked up with water pistols! Their energy and enthusiasm was infectious and everyone was soon greeting everyone in sight with their own ‘Happy Holi’s’. We honestly must have said that phrase about a thousand times throughout the day!

The streets were ominously quiet but as we rounded the corner back into Jagdish Chowk the remains of last nights party were gone and the square was buzzing full of people. We had arrived! We dived head first into the crowd and were soon swept up in the vivid chaos and colour of Holi festival. Drums were beating loudly, the locals were singing, dancing and jumping around and the colours were flying in all directions and in huge explosions overhead.

The locals were so excited to see foreigners in the crowd, greeting you with clouds of paint, ‘Happy Holi’s’, hugs, high fives and of course dozens and dozens of selfies which, on a day like that day, we didn’t mind obliging to. We spent a  while soaking up the atmosphere and getting more and more caked in paint before we took some respite up on the steps of the temple, watching the flurry of colour and drums reverberating below. It was sensational to see!

Up on the steps and out on the balcony we danced to the drums with our fellow hostel friends and chatted with families about the day! It was such a great atmosphere and a sight which we will never forget. The white city of Udaipur had been painted in multi-colour!

We had heard a lot from fellow travellers and even words of warnings from locals in the lead up to Holi Festival that it could get a little intense and unfortunately be seen as an opportunity by some of the young men to take advantage of women, especially foreigners. We weren’t sure whether to  believe this or not but it does have to be said as the afternoon drew on and the men’s excitement heightened and sobriety decreased there were certainly a few wandering hands. Nothing too awful but when its repeated it did become a little tiresome and intrusive so we chose to head back to the hostel. This is unfortunate on a day which was otherwise full of nothing but love, excitement and celebraation and I would say to not let it put you off attending Holi festival. Just be on your guard as you would be at any event and choose to celebrate Holi in the morning before things get too overwhelming!

Back at Zostel Udaipur we continued the Holi festival up on the rooftop and made our own party with music and plenty of cold Kingfisher beers. Everyone still covered in paint revelled in sharing their Holi festival stories and trying to dance without getting more paint in their eyes. As the afternoon wound down, the girls were first to sneak off to the showers to attempt to scrub off the hundreds upon hundreds of layers of paint! Josh being Josh was very reluctant to get in the shower wanting to carry on the party and stay colourful all night long! In the evening we had a huge dinner with everyone still feeling exhilarated from the days events!

Holi festival was definitely a highlight of our India trip and something we were so glad we could experience.  The buzz, excitement,  vivid colour and thrill of the day was something we really wont forget. As was the  chance to share it with so many friendly locals, families and children who made our day all the more special. If you are planning a trip to India then we couldn’t recommend celebrating Holi festival in Udaipur enough! Go get colourful!

We hope you have a just as fabulous, thrilling and colourful Holi festival as we did!

We are Charlotte & Josh, two twenty-somethings who, in 2016, decided to quit the London life and travel the world.

Now, after two years on the road, we’ve finally found a reason to lay down our backpacks…

We’ve fallen in love with island living in Sri Lanka and are about to live out our dream and open a hostel!
Follow our journey from travel couple to hostel owners and see how our story unfolds! 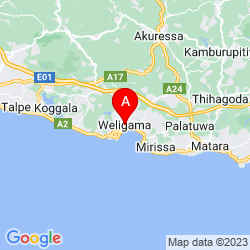